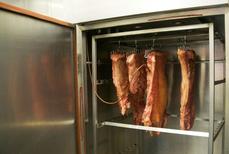 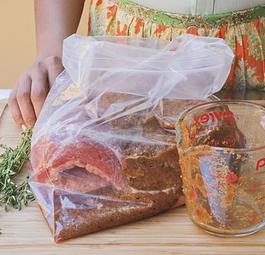 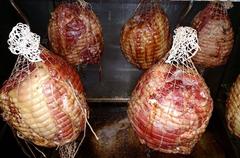 There are schools of thought out there that you should put your rub on the night before and let if marinade in that. Some have said that that pulls moisture out of the brisket. Some say you should put the rub on 30 minutes before you put it in the cooker to preserve moisture. The marinade above will instill flavor not pull out moisture.

Another Brine for a Whole Hog

Brining a pork butt before cooking is key to locking in moisture and flavor. I mix this brine and submerge the meat in it for 3 days before cooking.

3-4 hours before cooking i use a rub with yellow mustard that makes a nice paste. 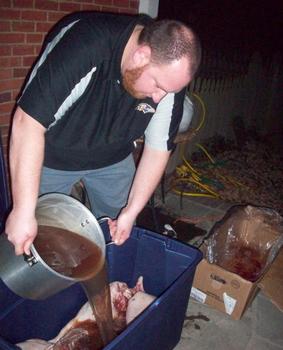 What’s in a brine?

A brine is a liquid that you put meat down into to push out the blood, hydrate the meat, and add flavor to for the duration of the cook. Brine-ing can keep a piece of meat moist longer. As the temperature in the meat rises it has more moisture to put out at the edges of the meat. Learn how to cook BBQ on The BBQSuperStars Cooking Channel

Brining does not technically “break down” proteins in meat. At least not the way marinating does.

Brining actually involves osmosis which carries salt and sugar inside the cell walls. This denatures the proteins causing them to unravel and interact with one another. This forms a matrix which traps moisture in the meat.

Marinating on the other hand actually does “break down” the proteins using acidity. The acid literally does consume the proteins and break down the texture of the meat. If the marinade has salt in it, then osmosis will occur as well and the marinade is also serving as a brine.

So, to answer your question: Yes, a salty marinade will brine your meat, but the protein breakdown that occurs is due to the acidity of the marinade.

Pour the warm water into a container that is twice the volume of the water. Pour in the salt, sugar, soy sauce, and olive oil. Stir until the sugar and salt have dissolved, then allow the brine to cool to room temperature.